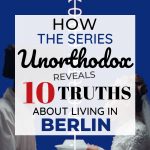 Watched the ‘Unorthodox’ Netflix series and curious to know how accurately it describes life living in Berlin? We’ve revealed 10 truths you should know about living in the capital city of Germany

We absolutely LOVED the new Netflix mini-series ‘Unorthodox’. We loved the story line, learning about the Orthodox Jewish culture (and that Yiddish is a German-derived language). But most of all, that it was filmed in our beloved city, Berlin!

Watching the series bought back many good memories. It reminded us why we chose to move to Berlin more than a year ago, rather than to any other European city.

So we thought we would share 10 truths that the ‘Unorthodox’ Netflix series reveals about life living in Berlin based on our personal experience.

Article Contents hide
10 Things You Should Know Before Moving To Berlin
1. Berlin is a culturally diverse city
2. Wannsee is one of many beautiful lakes in Berlin
3. There’s a lot of history in Berlin
4. Berlin is a city of creatives
5. …and also a city for misfits
6. You can fake speak German with just 3 words
7. Berlin, a gay and LGBT friendly city
8. Berlin’s techno club scene and its long queues
9. Berlin, a sexually liberated city
10. Berlin, a city where you can just be you
Living in Berlin as an Expat

10 Things You Should Know Before Moving To Berlin

1. Berlin is a culturally diverse city

In episode 1, Etsy joins a group of music students on a trip to the lake. In the car, they discussed where everyone was from and they mentioned this line that said:

‘And Robert is the only one of us who is actually from Berlin.’

This is so true! Especially if you’re an expat living in Berlin. You can meet people from all cultural backgrounds in Berlin. We have made friends from Brazil, Mexico, Croatia, France, Romania, the United States to Japan just to name a few. And must admit that amongst our circle of friends, only one or two are Germans from Berlin.

Why you may ask? It’s not because we don’t want to make friends with Germans. It’s just harder to get into the right social situations to meet local Berliners. This is especially true if you can’t speak German fluently.

As an expat, you’re likely to make friends at German language school. Overhearing a familiar accent while at a bar, hanging out at a park or even at one of the many Christmas markets in Berlin.

Most Berliners can speak English of course. But as an expat, it can come across as a bit inconsiderate to just strike up a conversation with a local in English and assume that they will speak in the language you’re comfortable with.

That’s not to say that it’s impossible to make German friends. The best way to do this is by meeting locals through a mutual friend or to learn to speak German.

Yes, it takes many months if not years to learn how to speak German fluently. But even if you start learning a few phrases and make an effort to try speak German, it will go a long way to create lasting friendships with local Berliners.

If you want to start learning the language, make sure to read out 22 ways to learn German online for free.

2. Wannsee is one of many beautiful lakes in Berlin

One of the most memorable scenes in episode 1 of ‘Unorthodox’ is the lake scene. The scene is filmed at one of the most beautiful lakes in Berlin called Wannsee. A huge lake located on the southwestern side of the city.

Berlin may be landlocked, but there’s no shortage of lakes. In fact, there’s more than 50 lakes in and around Berlin.

Spending the day at a lake is a very popular thing to do during the Berlin summer months. And with 50+ options, you’ll easily find a favourite.

Oh, and while we’re on the topic of lakes. Here’s another fun fact about living in Berlin: swimming and tanning in the nude is normal. So be mentally prepared to see people remove their bikinis or speedos before jumping in for a swim.

We must admit that we found this quite odd at first. But after we discovered that nudity represented a freedom of expression and is seen as natural rather than sexual, we loved the idea. Practicing it ourselves will take some time though. For now, we’ll keep our bikinis and swim-shorts on.

3. There’s a lot of history in Berlin

‘But we’re too busy defending our present to be sentimental about our past.‘

This line also highlights another truth about living in Berlin. The city encapsulates an incredible amount of history. There’s a story behind every sculptures’ face, every paint stroke and every carving. Just go on our Berlin Wall self-cycling tour and you’ll easily see why.

A lot of the history is pretty gruesome and devastating, and we admire the fact that none of it is hidden away or covered up. The memorials dedicated to these events are prominently displayed as a reminder of the mistakes made and a vow to never repeat history again.

Here’s another truth. Freedom of speech and the right to be heard is incredibly important in Berlin. Whether it’s animal rights, the gender wage gap, high rental prices or why contraceptives are not included in state medical insurance, you’ll find a group of individuals who will fight and defend these rights in Berlin.

4. Berlin is a city of creatives

Berlin has a huge creatives community. From musicians, artists, performers to photographers, comedians and bloggers. Just name it and you’ll most likely find it here in Berlin.

The wonderful thing is that people make an effort to support creatives and small business owners in Berlin. They understand that this is necessary to end the vicious cycle of ‘making the rich richer, and keeping the poor poorer’.

5. …and also a city for misfits

This is the #1 reason why we love living in Berlin – you can truly be whoever you want to be and this is why we say that it is a city for misfits.

This line comes from episode 2 where the group asks Esty why she came to Berlin and Axmed says:

‘I mean, imagine being a gay kid in Nigeria.’

Yes, Berlin is indeed considered to be one of the most LGBT friendly cities in the world. But it’s also a city where no one cares about what clothes or brands you wear, what your profession is or how much money you make.

It’s incredibly liberating to live in a city where these material and superficial things don’t define who you are as a person.

This is why so many people fall in love with Berlin and why ‘misfits’ come here to start over, try something new and follow their hearts.

6. You can fake speak German with just 3 words

This is a funny one! We actually made a joke about this a year ago when we had just moved to Berlin and started language school.

In episode 1 of ‘Unorthodox’, Dasia tells Esty that you can fake speaking German with just three words:

This translates to ‘really, exactly and correct’. And yes, you could actually fake speak German with these three words. But you’ll need a couple of beers (or Berliner Luft shots) to get that person really drunk if you don’t want to be caught out within 30 seconds of the conversation.

See what we mean?

Want to read this later? Pin me to your Living Abroad and Expat Life Board.

We’ve already mentioned this, but did you know that Berlin hosts one of the best gay prides in the world?

The Berlin Pride Celebration or better known as CSD Berlin (Christopher Street Day) is celebrated every year in July. CSD 2020 has been cancelled obviously, because of ‘you-know-what’. But we were lucky enough to attend this amazing event last year before this post coronavirus world.

It was one of the most unforgettable experiences we’ve had in Berlin and we highly recommend everyone to experience this celebration at least once in their lifetime.

You haven’t experienced the best of techno until you’ve experienced the Berlin techno club scene. But be prepared to wait in ridiculously long queues if you’re not a regular or lucky enough to get on the guest list.

The Berlin techno scene is a marathon, not a sprint. Why else do you think people can go in a club on a Friday and come out on a Sunday?

We’ve tried getting in at the famously, elusive Berghain TWICE. Both attempts unsuccessful after waiting 4 hours (twice!) standing in the cold in the middle of winter.

We tried everything in the book. Dress casually. Only wear black. Don’t look drunk or wasted. Don’t laugh, giggle or chat too much. Look emo. Look like you’re about to slit your wrists. But it was still mission impossible.

To be fair, we tried getting in on a Friday and Saturday night. Both notorious ‘bounce’ nights so we weren’t really surprised to be bounced.

We’re also not big clubbers but we love experiencing new things. Especially if it’s part of a city’s identity. So we’re glad that we’ve at least experienced the long queue part of the entire techno club scene equation.

Besides world-class techno clubs, Berlin is also known for its fetish clubs and dark rooms.

The most famous fetish club is KitKatClub. This club has been around since 1994 and embodies the inclusive, carefree and ‘be-who-you-want-to-be’ spirit that defines Berlin.

We still haven’t gotten around to going to KitKatClub, but we heard that it’s something to experience. Different nights have different dress (or rather undress) codes.

Dark rooms on the other hand, are dedicated rooms in a club where people go and have sex.

If your mind’s blown right now, we know how you’re feeling. That was our exact response when we first heard it ourselves.

But it’s true. Berlin is an incredibly sexually liberated city. There’s no walk of shame the next morning. It’s all about sexual empowerment.

Maybe that explains why women experience less sexual harassment in Berlin compared to any other city in the world.

10. Berlin, a city where you can just be you

If you’ve ever felt like you didn’t belong or just want to experience something completely different to what you know, you’ll probably find it here in Berlin.

Maybe that’s why we were both drawn to stay in Berlin rather than any other European city.

After all, what price tag would you pay for the freedom to be who you want to be?

Isn’t it the greatest accomplishment to be able to be yourself in a world that is constantly trying to make you something else?

So you see why it’s easy to love Berlin? Because Berlin loves you just the way you are.

Living in Berlin as an Expat

If you loved our quirky and unusual facts about living in Berlin and want to share your own experience with us, let us know via Facebook Messenger.

Make sure to check out our Moving to Germany guides if you want to learn more about living abroad in Berlin.

26 Work From Home Tips That Will Immediately Boost Your Productivity

Is Learning German on Duolingo Effective? An Honest Review 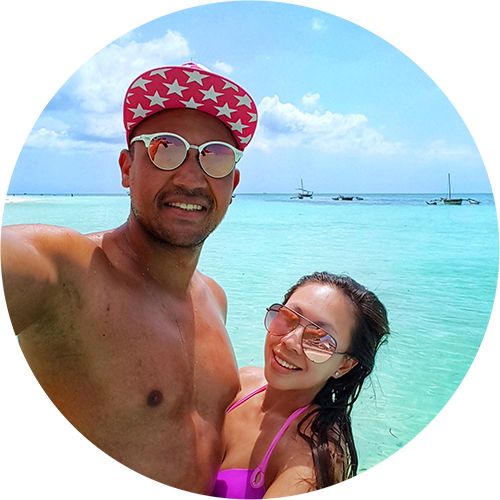 Hi there! We're an adventure travel couple from South Africa. We've hiked up mountains, dived the depths of the ocean, free-fell through the sky and finally walked down the aisle together. We love exploring the adventurous outdoors and discover hidden gems. Our dream is to inspire others to travel more consciously and responsibly while having an adventure of a lifetime!

READ MORE ABOUT OUR STORY